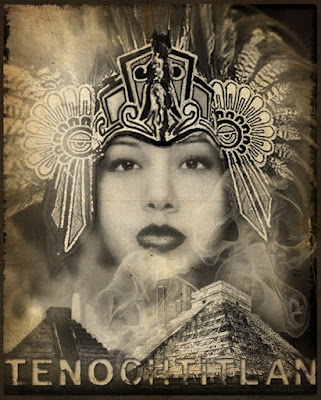 LatinoHiphop.Org:
If there is one principle that you can share with a young up and coming artist, what would it be?
Tenochtitlan:
The most important principle that I could emphasize to a young up and coming artist is WORK YOUR FUCKIN' ASS OFF. And when you get tired, work harder still. Tenaciously self-motivate. Don't expect ANY handouts. Earn your shit. Pay dues. Be early to shows you're performing at. No one wants to book a fuckin' slacker that shows up late or not at all. Some tree, some drank before a performance is cool, but don't get fucked up that you make a complete fool of your self, fuck up your set, and erode all if any credibility you had. Take some fuckin' pride in your work, in what people will think when they hear your name. Let that guide your work ethic.
LatinoHiphop.Org:
Where do you see the music industry five years from now?
Tenochtitlan:
Hip-Hop is constantly evolving. As in the different artistic movements, Renaissance, Neo-Classicism, Impressionism, Cubism, etc., one leads to the next. As the Hip-Hop culture explores and develops with different styles of rap, until we are fully satisfied, and then we begin creating new forms. From the big bang Rap Genesis with KRS One, Run DMC, Kool G Rap, Heavy D, Queen Latifa, to the OG gangsta rap with Snoop, Dre, 2PAC, the BIG PIMPIN' elegant rap of Biggie Smalls, to the highly intellectual Hip-Hop of the Wu-Tang, to the gutter and grimey MOBB, to the sexually revolutionizing unapologetic rap of Lil Kim, to the NEW SCHOOL of Busta Bus, to the MAD HEART LYRICISM of Talib Kweli, to the Anti-New World Order movement rap of Immortal Technique. In the next 5 years I think Hip-Hop is going in the direction where artists will continue to push the boundries of what's considered art and lyricism. Prime example, Mos Def with The New Danger, and The Ecstatic albums. I love that shit!!! Brand new, rock 'n' roll, international, sexy as fuck, clean, classic, mature, yet so street wit it! Big ups to Mos Def on his eclectic sound.
LatinoHiphop.Org:
How do you go about recording, promoting and releasing your music?
Tenochtitlan:
I have a couple spots to lay shit down at. A couple of pro spots, mostly homie's houses, homemade studios. Big thank yous to DEMICS for letting me come thru. DEMICS is a true master of his craft on this hip hop shit, he set's the fuckin' bar. I feel most comfortable in the hood when I'm recording. I can put my feet up, light a blunt, spit raw. If the place is too pristine, fuckin' sterilized n shit, I lose my inspiration. The passion goes limp n shit, hahaha. I've been blessed in working with some PHENOMENAL producers, my peoples Drift the Dean of GEM KOLLEKSHUNS, DJ STATIC, REDSKULL outta the UK, ROLECKS Productions, get at 'em for MAD ILL INSTRAS. DJ Tommyblak provides the ill spins for almost all my shows, and has helped tremendously with recording and editing. Big Thank yous to DjTommyblak, MAD TALENTED. And I use online social networks to put my music up, like facebook, myspace, and twitter. 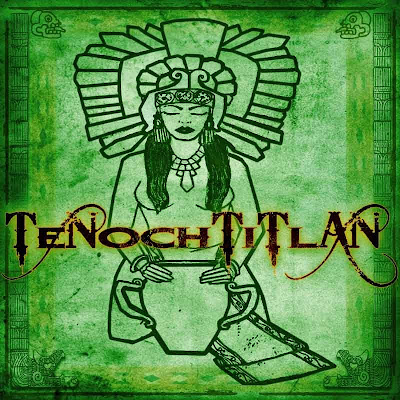 LatinoHiphop.Org:
What are you currently working on?
Tenochtitlan:
I just finished up my first music video for "CHINGONAS" with TopDime, the track is Rolecks Productions, music video produced by Charles Bronson, of BADFAME ENT. TopDime is a hardcore MC in her own right. I'm also currently working on finishing my album, OBSIDIAN RAPTURE, dropping June 2010. I have a photoshoot coming up with Eyekon Photography, which I'm excited about because I got some concepts for pictures that I haven't seen done before. Hard at work on the website, Templeofteno.com will be launching February 1st! That's gonna be mad ill. I've got a couple more collabs coming down the pipeline. Got a couple shows coming up. Wit Menez of GEM KOLLEKSHUNS holdin' me down onstage like a muthafucka. MENEZ is a ILL LYRICAL MC. That's my nigga!!! Much luv.
TOP DIME & TENOCHTITLAN "CHINGONAS" from charles bronson on Vimeo.
LatinoHiphop.Org:
What is the best place for people to find out more about Tenochtitlan?
Tenochtitlan:
People can find out more about me at www.myspace.com/templeofteno, follow me on twitter username templeofteno, and the official website, coming soon www.templeofteno.com for upcoming show dates, new heaterz, music videos, interviews, and community volunteer events that I take part in. Immaculate graphics on all my sites created by PSYKO INK. Big thank yous!!


Thank you very much for this interview, and BIG UPS TO LATINABEATZ for throwin' my name in the mix. To all my hiphop heads, stay up.
Much Respect,
Teno
--
Wishing you continued success!