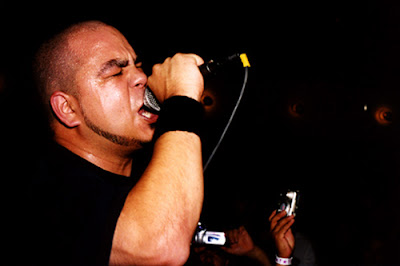 If there is one principle, habit or lesson that you can share with a young up and coming artist, what would it be?

There are many things that can be shared but for the sake of the interview, I would say one of the most important things is to build a solid network and to be dedicated to your craft. Also Don't be afraid to get dirty, in this business as a indie artist/label you got grind and hustle and constantly strategize your next move/s.

I see alot more independent labels with distribution deals. I see alot more social media sites that will cater to and help independent artists/groups. I also see online video playing a major role in the music business. I have also jumped in to this arena and created a site for producers worldwide called Beatseekers.com.

In Q2 of 2010, the site is currently being revamped with a strong marketing push behind it.

My latest album "Chronicles of a Krazy Race", was recorded entirely at The Dark Kingdom
by Ringleader DJ Ace and myself. I also recorded at my studio "The Lab" for this project. We used ProTools and Cubase/Nuendo and Izotope for mastering mixes.

Promoting the album is done by guerrilla tactics, we spread the streets/stores with flyers, I use YouTube, Myspace, Twitter and more to post flyers, promo videos, songs etc. I also reached out to my contacts at various online sites to help push the project. Shout to SoulAssassins.com, WestCoastRydaz.com, Brownpride.com , EmptyBellyMag.com and more for posting up videos and joints to the masses and doing features/interviews. Also shot to my music to online radio shows like Final Level Radio, Proof Of Life, Huskey Radio, Conspiracy Radio, East Los Radio, Rebel Radio and more, not only for playing my tracks but for doing interviews as well.

Releasing my music has always been 100% independent through my label Realizm Rekords/RPM Music Group. We post the project on iTunes, Rhapsody and numerous other digital online retailers and also make the project available on CDBaby.com so its officially available world-wide to be ordered in any state or country. I also use PayPal as a direct source for e-commerce if my fans/supporters want to buy the project directly off of me.

What are you currently working on?

Currently focused on still promoting my new album and our other artist Thief Sicario's new album called "Honor Among Thieves". I just dropped a world premiere on Jan 1st, 2010 of my new video called "Live on Stage" ft. Kahlee. This video was filmed in NY & CA and is a classic underground Hip-Hop song. In 2010 we will be releasing a compilation in Q2 called "The World Is Ours" Vol.3, and we're also dropping a mixtape from Realizm Rekords. I will also be dropping a couple other projects that will be digital releases only.

You can pick up my new album "Chronicles of a Krazy Race " ft. Chino XL, Sick Jacken of Psycho Realm, Gutterfame, Eric Bobo of Cypress Hill, Immortal Technique, Kahlee and more at www.cdbaby.com/cd/krazyrace1 .

What is the best place for people to find out more about Krazy Race?

My labels site is www.realizmrekords.com

You can also check out Krazy Race/Realizm TV on Youtube at www.youtube.com/latnskillz