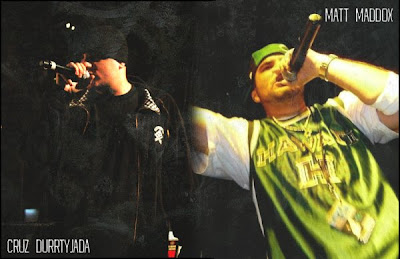 If there is one principle, habit or lesson that you can share with a young up and coming artist, what would it be?


Trust nobody. The deeper you get into this, the more you will understand that you will always have to deal with snakes. There is a lot of bullshit out there, so before you decide to put your soul into the music game you gotta figure out who you are, why you are doing this and keep a steady focus. Cause they will come after you and try to poison you. Go raw out.


In 5 years from now - I believe the music industry will end up being more raped than what it is today.
People seem to forget about legends such as John Lennon, Jimi Hendrix, Bob Marley, even Michael Jackson etc who came and revolutionized the entire industry and reached out to people and changed their lives forever. But at the same time, it all depends on who you are and how you visualize it. Guerilla War Tactix is more than just a couple of underground Hip-Hop heads - we fight in this struggle using verbal guerilla tactics to damage the unholy system that is constantly watching us all the time. So judging from my book I also believe that the underworld Hip-Hop kingdom will be a much doper place with artists like Bloodline, Human Genocide Process, Lord Lhus, Psych Ward, Grindhouse Gang and Guerilla War Tactix. On the behalf of warriors like that i would put it to you like this: wherever the world is at in 5 years from now, thats where we will be at to dominate the rest of it and keep our message shining like a blood diamond.


Its all independent. Since we all live in such a far distance from each other we constantly have to spit our verses at different locations. At the end of the day everything ends up at the mothership, where we put down the final touches. We promote our message via myspace, facebook, radio interviews, magazines, youtube, connections, it doesn't really matter what it is, as long as it gives us the opportunity to tell the world about our legacy.

What are you currently working on?


Right now i'm working on a couple of tracks together with Human Genocide Process, its a grimey horrorcore underground Hip-Hop group created by members of Bloodline.  I'm just trying to build with dope musicians and make psychotic grimecore music. Guerilla War Tactix first LP "The Invasion" is out right now so make sure to cop the masterpiece and support us.  The message is to invade the modern day Hip-Hop industry and take it back to the roots, the culture & the underground. It's the ultimate bankrobbing music. I'm also working on the followup project to "The Invasion" called "The Occupation" we are trying to build a circle and end it off by "The Domination"

What is the best place for people to find out more about Cruz DurrtyJada?


Find out more about me and my team at www.myspace.com/GuerillaWarTactix, if people wanna get in touch with me just hit us up on there, whether its collabo prices or just trying to link up with me.