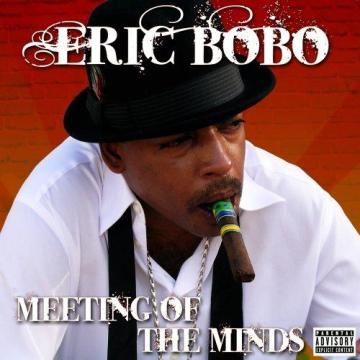 I had the good fortune of catching up with Eric Bobo recently and askied him about his new album "Meeting of the Minds" (which can be purchased here).
Eric Bobo is a well known percussionist who is best known for performing as full-time percussionist for Cypress Hill.
LatinoHiphop.Org:
1. When is your new album scheduled to be released?  Who is featured on it?

My album "Meeting Of The Minds" was released late last year. The album features B Real, Sick Jacken, Tony Touch, Ill Bill, Thirstin Howl III, Mellow Man Ace, Sonidero Nacional & more. I really wanted to bring different musical genres together since that's a big part of what I do.

2. How long has this album been in production?

The album took about 3 years to complete. Working on the album between tours with Cypress Hill made it a challenge because I had to sometimes divide my focus but it all worked out in the end.

3. What label is the album being released through?  Is the business model being used to push album, traditional or non-traditional?

The album was released thru Nacional Records which is a Latin-Alternative independent label. They have artists like Manu Chao, Los Fabulosos Cadillacs, & amp; more. They still operate more as an indie label than a major even though they are distributed by Warner Bros. I liked the fact that they are an artist friendly label & that they understand the way the music industry has changed yet still be effective.

4. What is the most interesting country you've visited while on tour?  What made it interesting?

I think a lot of the countries that I've visited on tour each have an interesting thing about them but mainly its the different cultures that you encounter. I really like South America, Japan & Europe. Also, the fans out there are very loyal to the artists that they like.

5. What changes do you see coming to the music industry within the next couple of years?

Well, we have all witnessed the crazy changes that have happened so far from digital downloads to the eventual demise of the CD. The industry has been trying to figure out how to make their money in the age of free downloading, yet millions of people have embraced the digital music stores like Amazon & ITunes. I do believe that now there are so many opportunities for artists to get their music heard both independent & established, so to me, the future for the music industry doesn't look that bad at all


Also, be sure to keep up with Eric Bobo online @ his official website;  www.EricBoboMusic.com.


And for the Social Media gurus out there:


Friend him on Myspace here.


Or become a fan on Reverb Nation here.