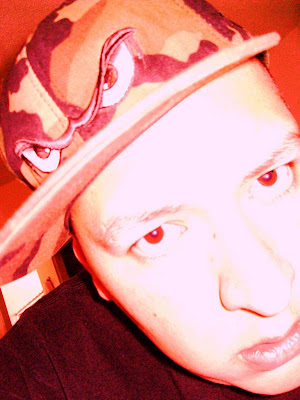 Since 1998 I've been recording with my partner in crime, Zachary "Status" Young at Cadava Recordings in Denver, Colorado.  At this moment I'm living in Arizona right outside of Phoenix and I've started recording new material with a couple cats who record progessive rock.  I promote my music along with my crew (Afterlife Allstars) by selling it in the hood the old fashion way, out the trunk, swap meets, flea markets etc. I had my albums in stores all over Colorado but since the decline of record shops with many closing down, I was quick to get my music available digitally for everyone to purchase around the world on sites like iTunes, Amazon, Napster etc.


If you received $100,000 dollars tomorrow, that you had to use on your music, how would you use it?


Well I'd just get about every damn thing I'd need to make the greatest music I could! I'm talking about my own studio, live instruments and paying vocalists to come in and take part.  Build on something bigger and greater then just Hip-Hop. I'd promote like crazy and tour globally! I'd have some of the best "outside" artists come in and design some sick and disturbing art work for my mech (shirts, stickers, etc).


Music will never die. The industry, well that's a different story.  As an indie artist I feel that doing it on your own is the way to go. I know cats that have had them big record deals we all wanted, and they'd get shelved or just straight fucked out of money. Still waiting to get paid. I haven't met anyone in the biz yet that believes enough in the Hip-Hop I'm creating to push it forward. They always wanted me to change the content or have the beat more clubby or something wack that I wasn't down with.  I'm a do me and say fuck the industry!


I just released a solo album titled KROOKID HOOKS: DARK COMEDY which is available on iTunes globally!  I'm also working on the Afterlife Allstars album featuring Status, Azma, Life the M.c, Louie Cypha and Manic.  The A.A. album has alot of live instruments with sick drum beats to back it!  We recently shot a music video for the Afterlife Allstars project titled "Yeah!" If you like to drink and have a good time, this is the song to do it to!  Look for it on YouTube or Vimeo.

What is the best place for people to find out more about you?

I want to thank Cristopolis for taking time out to interview me and having interest in my music and cause.