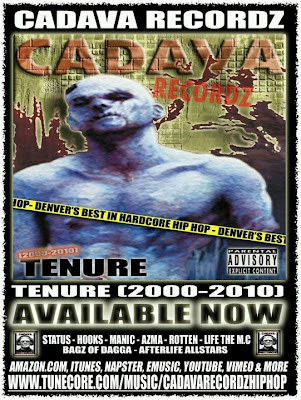 I recently touched base with Krookid Hooks of Cadava Records and asked him what he's been up to......
LHH.co: What new releases do you have coming out?
Krookid Hooks: Cadava Recordz just released an album titled 'Cadava Recordz Tenure 2000-2010', a best of through out the decade album.
Also, I'm releasing a collabo album titled 'Krookid Kollabos' featuring artists from my hometown that I've never worked with along with core members of Cadava. That will be released in a few months.
Cadava Recordz has made 4 music videos since we last spoke. One of them (directly below) is a solo track from yours truly, Krookid Hooks:
Krookid Hooks "And Now The Screaming Starts" Music Video from Vince Lance on Vimeo.
From the crew within the crew 'Bagz Of Dagga'.  'Afterlife Allstars' is the 6 of us and 'Bagz Of Dagga' is the 4 you see in this video:
Bagz Of Dagga "40 Breaks" Music Video from Vince Lance on Vimeo.
Also.... if you check out this wiki, you'll see Status and Krookid Hooks are prominent artist's in Denver, Colorado. http://en.wikipedia.org/wiki/Southwest_hip_hop