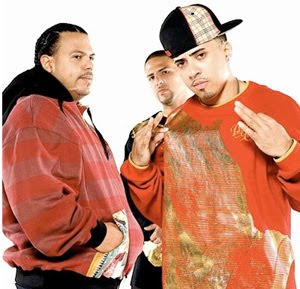 T-Weaponz hailing from Brooklyn, New York, is composed of brothers IzReal and Arkitek and their neighborhood friend Psalmz.

After meeting at an impromptu neighborhood 'CIPHER' (term used to describe a circle of emcees rhyming together) and later discovering how many similarities they shared both in terms of their life experiences and their ideals they soon came together under the moniker Tomorrow's Weaponz, which they later shortened to T-Weaponz, representative of how the trio lives for today and hopes for a tomorrow using their own weapons-thoughts and wits.

T-Weaponz's intellectual lyrics fuse their ability to interweave street scenarios and anecdotes with historical and literary references. From Ark's precise flow to Iz's raw, straightforward lyrics with Psalmz's poetic flair for metaphors and wordplay, the MCs formed a perfect triangle, complementing one another and ushering in a new sound for the masses. Over the years, T-Weaponz's unique lyrical style, catchy beats and desire to bring truth, hope and justice to the streets has garnered the group many successes, among them:


2008: T-Weaponz released the “XtraOrdinary” music video, which featured West Coast female-MC Diamonique and cameos from famed producer Fingazz and poet La Bruja. The video was added to rotation at NBC Mun2 and MTV Tr3s, as well as many regional and Internet video shows. The group also appeared on MTV Tr3s’ Sucker Free Latino, giving the show a tour of Brooklyn's East New York, where they got their start. T-Weaponz recently completed a tour of Colombia and have been in the studio working on album number two.


2007: T-Weaponz released their digital full-length debut entitled Just Begun.., which features production from hit-maker Fingazz of Streetlight Music. With this highly anticipated released, the group was featured in two consecutive issues of The Source Magazine: Off the Radar (Dec. 2007) and Tale of the Tape (Nov. 2007). LATV segment following T-Weaponz to their album release aired to exceptional viewer ship. It beat out Mun2's "One Nation Under Hip Hop," MTV Tres's "Karlifornia," and came in slightly under MTV's "The Hills" in the Los Angeles Area.


2006: In December 2006, T-Weaponz released the bounce-laden single Dem Boyz, featuring Houston rapper Trae, which debuted at No. 7 on Billboard's Top R&B/Hip-Hop Singles chart, and where it remained for six consecutive weeks.
2005: T-Weaponz's audience skyrockets with the release of the catchy bilingual anthem “Mira Mira.” The wildly popular "spanglish" track, which features Cuban rapper Pitbull and Notch, formerly lead singer of the Born Jamericans, bridges the gap between English- and Spanish- speaking people with its witty fusion of English and Spanish words. In a matter of months, the song became an international hit catapulting T-Weaponz into the mainstream. Mira Mira garnered over 15,000 radio spins nationally and surpassed 50,000 in digital download sales.

2004: T-Weaponz releases the first installment of the Survival Muzik MIXTAPE, which The Source magazine featured in its "Best of the Best" mixtape review section.


2003: the Alchemist-produced Raised in the Slums, off T-Weaponz's independently released The BlackOut EP, which tackled the issue of being raised in the slums and by the sound of the gun, entered the New York City scene, and earned them acclaim in Europe and the West Coast driving the sales of BlackOut EP to over 10,000 units thereby solidified T-Weaponz's status as a group to watch.


Armed with an endless arsenal of rhymes and an enormous devoted fan base that transcends cultural barriers, T-Weaponz is poised to blaze into center stage. Check for a new album and for T-Weaponz at major festivals throughout 2009.