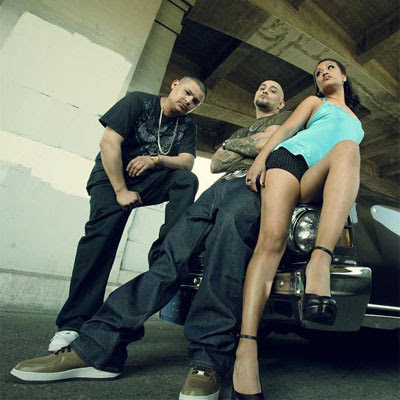 When La Sinfonia launched its debut album El Dolor, La Lucha, Y El Triunfo, it was a watershed moment in Latin hip-hop. After years of being marginalized, Hispanic urban music (Hurban) was making up for lost time with a renaissance of young Latino talent whose official language was “bilingual”. Raised in East L.A. by immigrant parents, La Sinfonia was a different kind of group that stood out from the rest. The beats and the flow were always at the forefront with rappers Arsenal (Luis E. Bañuelos) and Seis (Alfonso García), however, their secret weapon was the passionate vocal blend provided by singer Vanessa “Vane” Bañuelos. Songs like “Inseparable” and “Abrázame Muy Fuerte” possessed a drama and a timeless sweep that made them hits at Hurban and Latin pop radio, while garnering praise from the press and music critics alike.

On their second album, titled La Sinfonia, the hip-hop trio teamed up with decorated producers The Co-Stars (Teiarra Marie, Jaheim, and Chingy). Together they have charted an inspiring path blending culture, life, and social commentary with catchy melodies and driving beats. With vibrant vocals on songs such as “No Merezco Tu Perdón (Idiota)” and “Lullaby”, the group reflects on their family, neighborhood, and culture to relay stories of perseverance against the many obstacles of the inner city existence. It’s a theme that runs through many of La Sinfonia’s songs, offering themselves as proof that dreams can come true for a Latino from the Barrio. The Co-Stars’ strengths with R&B and soul are notable as the group broadens its appeal while maintaining its East L.A. heart.

The first single at Latin radio, “No Merezco Tu Perdón (Idiota)” features Vane singing the chorus of Joan Sebastián’s smash “Idiota”. It’s the first time the consummate singer-songwriter has granted permission for his work to be used in a hip-hop song.

One major change for this group was complementing its Spanish-language songs with new material in English. “Lullaby” is an uplifting song that blends Pop and hip-hop elements to tell the story of persevering young love in the streets. Vane sings, “Against all odds, you are the one and you go hard on the block and tell me theirs nothing but love, so I’ll be your Lullaby.”

Clearly, La Sinfonia rolled up its sleeves and re-thought how it wanted to do things this time around. As Seis notes: “The Co-Stars had the style we were looking for. They were more our sound and we ended up finding our true ‘stilo.” Adds Arsenal: “It’s feel-good music. The whole family can listen to our album. This album is for any age.” There was a comfortable vibe on the 2007-08 sessions – The Co-Stars crafted beats that LA La Sinfonia loved, while Vane, Seis and Arsenal had plenty of time to work and re-work their lyrics.